Home Sport How to improve your football game through training

Thinking of starting up your own amateur football team? Then you’ll need some great warming up exercises and football drills to practice to improve your game. Having a training plan is essential to get the most out of your time together as a team and to ensure that all the skills that are needed are covered throughout the season.  Here are a few ideas for practicing different skills so your first match is a successful one:

Dribbling – Fans love to watch the players who can dribble the ball and sneak past opponents with ease, it’s exciting to watch and has us on the edge of our seats. To develop some top dribbling skills, try the game ‘Beat two and score’. Line up two teams outside a 10-yard marked square. Each team puts a second defender to defend outside the square. Two players inside the square waiting for the ball to be passed to them and once it is, the 1 versus 1 duel begins. One player must dribble the ball out of the opponent’s end line, into a 1 vs 1 scenario with the second defender with the aim of beating them and scoring. Ensuring you have the right equipment is also key to making the most of your training sessions. If your team is in need of new Football Training Kits, then football kits from kitking may be a great place to start. 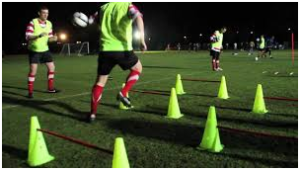 Tackling – Try a 1 vs 1 tackling exercise and teach your team how to evade tackles and win the ball. Using the centre circle, mark out a circle with cones to a width of about 30 yards in diameter. Mark out four goals with cones and split your team into four, next to each goal. Four players will be on the pitch at any one time and the aim is to defend your goal but score in any of the other three as well. Any player who lets in a goal is rotated with another player from their team. The last player on the pitch represents the winning team. You should also make sure that your players are aware of the rules surrounding tackling so that they don’t fall foul of a yellow or red card.

Inside Foot Warm-Up Pass – This warm-up drill provides effective practice for warming up and receiving and making passes from the inside of the foot. Make a small opening with two cones, about 4 yards apart with two groups of players standing either side of the opening. Player 1 passes the ball through the opening to player 1 in the opposite line. The receiving player then passes back to the second player in the opposite line and runs around to the back of the opposite line. This repeats several times until everyone has warmed-up and practiced their inside foot passes several times.

Shooting – A great game for shooting practice is this simple set-up. Using 10-12 cones, make a lane leading up to the penalty area. At the end of the lane, place a line angled in the direction of the corner flag with a further 4-5 cones. With the coach standing at the end nearest the goal, players start at the top of the lane with a ball. Passing the ball back to the player once it has been passed to the coach, the player then needs to make a shot on goal. The coach will lay shots off to either and try different shots so the advancing player is forced to react.